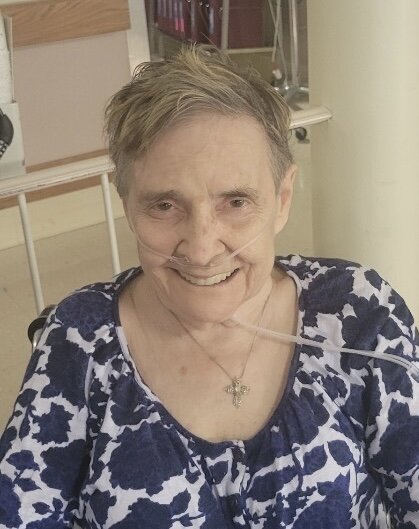 Please share a memory of Eleanor to include in a keepsake book for family and friends.
View Tribute Book

North Greenbush- Jones, Eleanor C, "Ellie" passed away peacefully on September 9, 2022 at the Van Rensselaer Manor after an 8 year battle with COPD/Parkinsons. Born on December 21, 1943, in Albany, she was the daughter of the late William Jones and Catherine McCarty. Eleanor graduated from Albany High School. She spent most of her working years at Albany Public Supermarket and later retired from the Golob Corporation.

She is survived by her daughter Lisa Miller (Robert) of Poestenkill, her long time friend Dana Purdy and her son in laws family, the Sowden and Foster families. She was a cherished grandmother to Karissa White (Todd), Courtney Clementi (Austin) and Johnny Clementi (Alicia). Adored great- grandmother to Mackenzie Sheldrick, Wyatt and Clayton White and Nicholas Litchfield Jr., Ella and Mia Clementi. Also surviving are her sisters Lorraine Motzer of Florida and Catherine Hallenbeck of Cohoes; her two brothers John Jones of Herkimer and Tom Jones (Irene) of Florida. She is survived by several nieces, nephews and cousins and her two grand-fur babies Piper and Pepper.

She was predeceased by her daughter, Denise Martin. Ellie's long time partner and father of her children, Kenneth Martin. In addition to her brothers the late William and Kenneth Jones, she was also predeceased by her two favorite brothers in law, Robert Hallenbeck and Hank Motzer; her two sisters in law, Gail and Sandra Jones; niece and nephew Kim and William Jones.

Eleanor enjoyed spending time with her grandchildren the most and prior to her declining health she enjoyed hanging out in the pool, going to the beach and spending time at the casinos.

Special thanks to the staff at the Van Rensselaer Manor for taking care of our loved one and treating her like family (especially the staff on A2) we are forever grateful.

Funeral service will be held at the W.J. Lyons Jr. Funeral Home, 1700 Washington Avenue, Rensselaer, Weds.  Sept. 14th at 11:30AM.  Relatives and friends are invited and may call prior to the service beginning at 10 AM.  Interment will be in Memory Gardens, Colonie.

To send flowers to the family or plant a tree in memory of Eleanor Jones, please visit Tribute Store
Wednesday
14
September

Look inside to read what others have shared
Family and friends are coming together online to create a special keepsake. Every memory left on the online obituary will be automatically included in this book.
View Tribute Book
Share Your Memory of
Eleanor
Upload Your Memory View All Memories
Be the first to upload a memory!
Share A Memory
Send Flowers
Plant a Tree