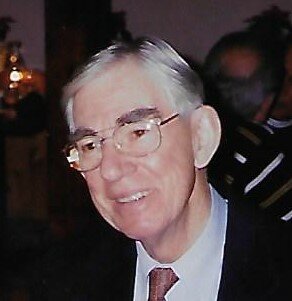 Please share a memory of Anthony (Bud) to include in a keepsake book for family and friends.
View Tribute Book

Bud graduated from St. John’s Academy in Rensselaer class of 1945.  Following an enlistment in the Army Air Corps, he graduated from Roosevelt School of Aviation, Long Island Class of 1948 as an aviation mechanic.

For the next 43 years he was at the Albany County (now International) Airport beginning with a 14 year employment with fixed base operator O’Connor Aircraft during which time he obtained his pilot’s licenses and subsequent to O’Connor’s retirement became an employee of NYS ENCON Division of Aviation until his retirement in 1991. His passion for aviation never wavered.

In addition to his parents, he was predeceased by brothers William and Robert and his wife Eleanor. He is survived by his siblings Anastasia “Nancy” Traegler, Paul and Frederick Hill as well as seven nieces and seven nephews, several grand nieces and great-grand nieces and nephews.

Bud was a communicant of Sacred Heart Church in Troy from whence his funeral will be held on Monday February 14, 2022 at 10:30 AM.  Relatives and friends are invited and may call to the W.J. Lyons Jr. Funeral Home, 1700 Washington Avenue Rensselaer, Sunday, February 13 from 1-3PM.

Interment will be in Holy Sepulchre Cemetery, Rensselaer.

To send flowers to the family or plant a tree in memory of Anthony (Bud) Hill, Jr., please visit Tribute Store
Sunday
13
February

Look inside to read what others have shared
Family and friends are coming together online to create a special keepsake. Every memory left on the online obituary will be automatically included in this book.
View Tribute Book
Share Your Memory of
Anthony (Bud)
Upload Your Memory View All Memories
Be the first to upload a memory!
Share A Memory
Send Flowers
Plant a Tree