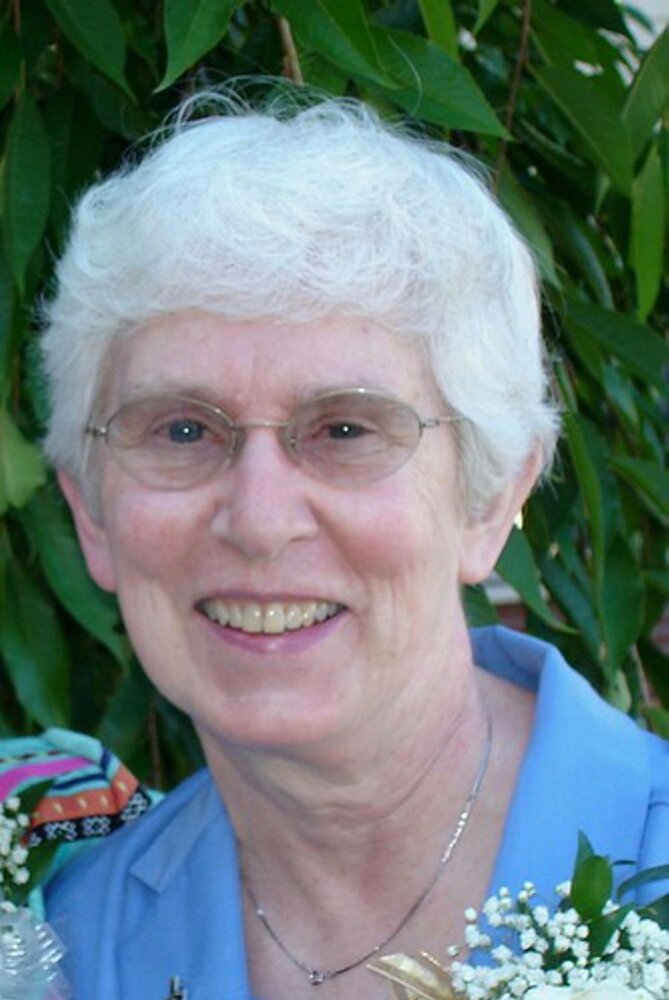 Please share a memory of Sr. Jane to include in a keepsake book for family and friends.
View Tribute Book

Albany- Leach, Sister Jane C., RSM (formerly Sister Bernard Mary) died January 19, 2022 at Saint Peter’s Nursing and Rehabilitation Center, Albany.  Born in Ilion, NY, she was the daughter of the late Bernard Leach and Marjorie Ackley Leach.  She had been a Sister of Mercy for 65 years.

Sister earned a Bachelor’s degree from Siena College, Loudonville.  She ministered as a teacher at St. Mary’s, Oneonta; St. Joseph’s, Rensselaer; St. Patrick’s, Johnstown; Blessed Sacrament, Albany; St. Agnes, Cohoes; and Waterford Central School.  Sister Jane spent several years as school secretary at Holy Cross School, Albany, where she also did outreach work in the parish.     Contemplative by nature, Sister Jane was grateful for the opportunity to spend three years at Our Lady of Grace Dominican Monastery in Guilford, Connecticut, living the vowed life according to the monastic tradition.  Upon returning to the Albany Diocese, she served as a receptionist at St. Peter’s Home Care.  Quiet and unassuming, Jane reached out in kindness to the staff; they loved her and appreciated her warm smile and the service she offered them.

Sister Jane enjoyed a simple lifestyle; she loved nature, especially birds and plants.  She could readily identify multiple species of both and was in her glory when she could spend time at Five Rivers or at the ocean.  Reflective of her commitment to protect the environment, she maintained current memberships in the Sierra Club, Earth Justice and Nature Conservancy.  Jane was a voracious reader, devouring the printed word from cover to cover, whether newspapers, books on spirituality, history, science fiction or a good novel.  She loved to knit and welcomed the dual opportunity to engage in an activity she enjoyed while creating practical gifts to offer to those in need.

Sister Jane’s final, and perhaps her favorite ministry, was as support staff in the Office of the Registrar at Maria College, Albany.  It was a perfect fit, for Sister Jane, for the registrars, and for the students, and she became a loyal friend.  Her willingness to manage the office when needed freed the registrars to attend meetings they might otherwise have missed.  She was amazingly open to learning new data bases and technology.  Although shy and somewhat reticent, Sister Jane had a keen sense of humor which endeared her to others.  It was not uncommon for students to stop in at the office not because they had business to take care of with the registrars but simply to visit with Sister Jane.    The schedule showed Jane working four mornings a week, but she was flexible enough to add a fifth when needed.

When she was no longer able to live independently, Sister Jane graciously accepted that it was time for her to move to the nursing home.  Although she herself was a resident, she took it upon herself to watch out for the needs of other residents less able than she, making certain they had received meals and essential services, and inviting them to join with others to watch television or engage in other activities.  She had special devotion to the Eucharist and welcomed the opportunity to receive Communion as often as possible.

Sister Jane maintained strong bonds with her family, despite the fact that in Sister’s later years, most of her relatives lived at a distance.  In addition to her parents, Sister Jane was predeceased by her brother Bernard (Reiko) of Buffalo.  She is survived by her sister, Mary Lou Hebert (the late Kenneth) of Connecticut; her brother, William (Minyo) of Georgia, and several nieces and nephews as well as by her religious community, the Sisters of Mercy and Mercy Associates.  A reception of Sister’s body will be held Monday, January 24, 2022 at 9 a.m. at Blessed Sacrament Church, 607 Central Avenue, Albany, followed immediately by a wake.  A Mass of Christian Burial will be celebrated at 10 a.m.  Masks must be worn and social distancing observed.  Interment will follow in Holy Sepulchre Cemetery, East Greenbush.  The Sisters of Mercy wish to express our gratitude to the staff of the Convent of Mercy, Albany, and St. Peter’s Nursing and Rehabilitation Center for the great tenderness with which they cared for our Sister.  Contributions may be made in Sister Jane’s memory to the Sisters of Mercy, 634 New Scotland Avenue, Albany, New York 12208.

To send flowers to the family or plant a tree in memory of Sr. Jane Leach, please visit Tribute Store
Monday
24
January

Look inside to read what others have shared
Family and friends are coming together online to create a special keepsake. Every memory left on the online obituary will be automatically included in this book.
View Tribute Book
Share Your Memory of
Sr. Jane
Upload Your Memory View All Memories
Be the first to upload a memory!
Share A Memory
Send Flowers
Plant a Tree