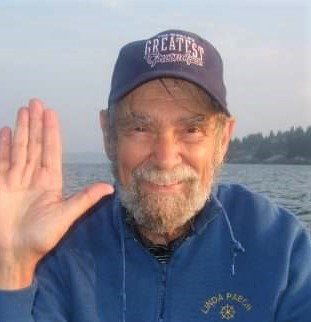 Please share a memory of Peter to include in a keepsake book for family and friends.
View Tribute Book

Born on August 28, 1929, in Ann Arbor, MI to the late Dr. Floyd H. Lashmet and Irene R. (Spangenberg) Lashmet, he grew up in Petoskey, MI and graduated from Petoskey High School in 1947. He continued his education at University of Michigan, graduating in 1952 with a BSE in Chemical Engineering and Math and an MSE in Chemical Engineering. Upon graduation from University of Michigan, he worked at The M.W. Kellogg Company, New York, NY from 1952-1953.

Being drafted into the Army during the Korean War, he served in the US Army in the Chemical Corps at Fort Knox, KY and Pine Bluff Arsenal, AR from 1953-1955. He was very proud of his service.

He met his beautiful bride in NYC and fell in love. He married the late Edna Rosa Pabon-Tua in the Church of the Transfiguration also known as “The Little Church Around the Corner” in NYC on June 9,1956. They were blessed with 5 children, which he said was his most precious accomplishment in life.

Soon after their wedding, they moved to Newark, DE where he attended the University of Delaware, completing his PhD in Chemical Engineering in 1962.

He worked at Air Products and Chemicals in Allentown, PA from 1958 - 1965.  Then he began his long career as a Professor of Chemical Engineering at Rensselaer Polytechnic Institute retiring in the summer of 1991.  He was honored for undergraduate teaching and advising at RPI by an anonymous, former student who endowed the P.K. Lashmet Professor of Chemical and Biological Engineering Chair.

During his retirement, he bought a boat he named the “Linda Pabon” and was licensed by the U.S. Coast Guard as a U.S. Merchant Marine Officer: Master, Inland 50 gross tons, and also licensed by the Federal Communications Commission as Marine Radio Operator. He and his wife took trips along the intercoastal waterway as well as a memorable voyage to the Bahamas.

Following the passing of his wife in February 2001, he continued his nautical adventures by sailing aboard the schooner “Grace Bailey” in Camden, Maine over many summers.  In subsequent years, he took several grandchildren on the trip to share this experience.

He followed all of his grandchildren’s education, sports and activities and enjoyed learning about everything in which they were involved.

Per his request, services are private at the convenience of his family. He will be buried with military honors at Saratoga National Cemetery.

The family would like to thank all the staff and friends he made at the Summit at Eastwyck in Defreestville, NY.  He truly enjoyed the last eight years as a resident of the independent retirement community.

In lieu of flowers, donations can be made in his memory to the Folds of Honor Foundation, foldsofhonor.org.

To plant a beautiful memorial tree in memory of Peter Lashmet, please visit our Tree Store

A Memorial Tree was planted for Peter
We are deeply sorry for your loss ~ the staff at W.J. Lyons Jr. Funeral Home, Inc.
Join in honoring their life - plant a memorial tree
Share Your Memory of
Peter
Upload Your Memory View All Memories
Be the first to upload a memory!
Share A Memory
Plant a Tree