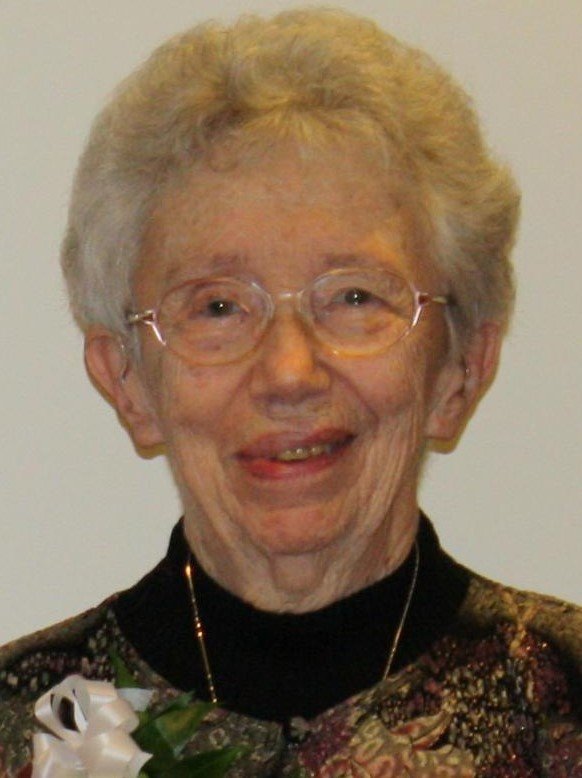 Albany- Joyce RSM, Sister Martha A. (formerly Sister Mary Arthur) died at the Convent of Mercy, Albany, on Thursday, October 17, 2019.  She had been a Sister of Mercy for 69 years.

Born in Rochester, New York, Martha was the daughter of the late Arthur A. Joyce and Louise C. Rapp Joyce.  She earned a bachelor’s degree from New York State College for Teachers, Albany, and a master’s degree from Catholic University, Washington D.C.  Sister Martha ministered as teacher and principal at Vincentian Institute, Albany, and served as Dean of Maria College.  She was an excellent teacher and a gifted speaker. Long after she moved on to other ministries she continued to take great interest in the progress of Maria College.  Sister Martha was called to serve on the leadership team of the Albany Sisters of Mercy, first as Councilor, and later as President.  An excellent listener, she was profoundly respectful of the opinions of others and engaged them in decision making.  She took the time to hear about and explore all sides of an issue.  Sister served on numerous Boards.  Additional ministries included Parish Coordinator of the former St. Patrick’s Parish, Albany; Treasurer of the Albany Sisters of Mercy; and Librarian at the Regional School at St. Casimir’s, Albany, where she, an avid reader herself, worked to instill in the children a love of reading.  Whether with a student, a friend, a co-worker or someone she just met, Sister Martha offered each person her undivided attention and remained non-judgmental in her dealings with them.   Attendees at meetings were relieved when Martha moved toward a microphone because they expected her to synthesize a few hours of sometimes tedious input and table conversation into four or five sentences; they were not disappointed.  Sister Martha and Sister Alene interacted daily with their neighbors in Arbor Hill.  In true Mercy fashion, they identified needs and responded to them in real but unobtrusive ways.  Children who knocked on the Sisters’ door were greeted with cookies; they knocked regularly.  Tutoring in Math was another service freely given.   Supported by a generous benefactor, the Sisters shopped and wrapped and made certain Santa didn’t miss a single home in the neighborhood.  Well into her nineties and experiencing serious loss of vision and hearing, Sister Martha never retired from life.  She continued to nurture her mind and to be fascinated by new ideas, whether in science, technology or theology.  She shared her insights in book discussions.  Sister Martha maintained a marvelous sense of humor, marked by her quick wit and the ability to laugh at herself.  A Wisdom figure, she was highly respected!  A faithful friend, she was a gift!  A woman of contemplation and action, she was a true daughter of Catherine McAuley!  Sister Martha Joyce will be greatly missed.

In addition to her parents, Sister Martha was predeceased by her brothers, Donald P. Joyce and Allyn A. Joyce, her sister, Mary Louise Testa, and her dear friend, Sister Mary Alene Slattery.   She is survived by many nieces, nephews, grandnieces and grandnephews, as well as by her religious community, the Sisters of Mercy and Mercy Associates.

Viewing hours will be from 4:00 – 8:00 p.m. Monday, October 21, in the Chapel of the Convent of Mercy, 634 New Scotland Avenue, Albany.  Relatives and friends are invited to attend a Prayer Service of Remembrance in the Chapel at 7:00 p.m.  The Liturgy of Christian Death and Burial will be celebrated at 9:30 a.m. Tuesday at the Convent of Mercy.  Interment will follow in Holy Sepulchre Cemetery, East Greenbush.

Contributions may be made in Sister Martha’s memory to the Sisters of Mercy, 634 New Scotland Avenue, Albany, New York 12208.