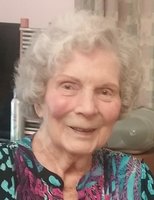 Rensselaer- Ellen Jane (Crampton) Irving died peacefully on Jan. 16, 2021,at Van Rensselaer Manor in Troy, NY. “Jane”, as she was known by most, was born in Morris Cove, CT, on Jan. 7, 1924. She was the daughter of the late Harold and Veronica (Miller) Crampton. Having lost his marina in CT during the Depression, Jane’s father moved his family to Coral Gables, FL, to seek similar work. Jane spent most of her youth in FL and moved back to CT after graduating Ponce de Leon HS in 1942. She worked for the Standard Gun Mfg. Co. and Southern New England Bell Telephone during WWII. She was then recruited by Remington Rand and sent to NYC for training as a Systems Service Operator. Jane was transferred to Albany, NY, in 1945. It was then that she met the love of her life, LeRoy G. Irving. They were married in Nov 1946 and started their life together on Mann Ave. in Rensselaer, NY. Over the next 60 years they set down roots in that neighborhood, established many lasting friendships, and raised their 2 children. Jane was a communicant of St. Joseph’s/St. John’s. She was an active participant in the Rensselaer Little League, the Ladies Dart League, and Van Rensselaer’s PTA. She was also a member of the Capital District Reserve Officers’ Ladies Association, serving as a historian. As a hobby, Jane dabbled in ceramics and won many ribbons for her artwork. She and Le loved to travel and dance. She was also an avid birdwatcher. After raising her family, Jane went to work at Flah’s department store in Albany and then she went to work for the NYS Dept. of Social Services’ Child Abuse Registry. She retired from NYS in 1988. She became a retired member of the CSEA and a member of the Rensselaer Senior Citizens. After 61 years of a loving marriage, Le predeceased Jane in 2007. She was also predeceased by her parents, her beloved son Lee Irving and her 2 siblings, Alberta Guidone and Richard Crampton. She is survived by her daughter, Darryl (Brian) Dillon of Poestenkill, NY, her daughter-in-law, Linda Irving, of Hudson, OH, her grandchildren Lance (Sharon) Irving, Lisa (Scott) Friel, Shannon Dillon, Brianna (Damien) Williams, and her 4 great-grandchildren, Wyley, Eila, Ellen, and Henry. She is also survived by several nieces and nephews. A very special thank you to the staff at Van Rensselaer Manor who cared for Jane the last 4 years of her life, including her dedicated OptumCare Nurse Practitioners who compassionately provided her with comfort and quality of life for as long as possible. And thanks to her dear friend, Ann Hoffman, who was an aide to Jane in assisted living at Hawthorne Ridge for many years and remained a true friend until the end. Due to Covid-19, services and burial will be arranged at the family’s discretion and kept private. In place of flowers, please make a donation to any charity that is near and dear to your heart. Jane would like that.