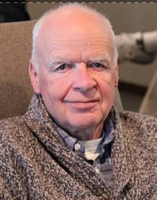 CASTLETON – Thomas W Reese, age 84, passed away peacefully on November 4, 2020. Tom was born on December 23, 1935 in Rahway, NJ to the late Thomas W Reese, Sr. and the late Sarah “Ha” Hassell Reese. “Wee-T”, as he was known while he was young, enjoyed his early years in Granby and Holyoke, Mass where his family relocated while his father taught at Mount Holyoke College. He relocated to New York City during WWII and attended Grace Church School and then George Washington High School, Fairleigh Dickinson University, Columbia University, New York Institute of Photography, and Broome Community College. In 1960, Tom married Anne Wirth Reese, and together they had two daughters, Nancy and Susan. He worked first as a photographer and then for New York Bell Telephone as an installer, which began a more than 35-year career in telephony. In 1973, Tom and his family moved to Marathon, NY to pursue his dream of living on a farm. In 2016, he moved to Castleton, to be closer to his children and grandchildren, whom he adored. After his retirement from Frontier Communications, he began his second career as Superintendent of Buildings and Grounds at Lime Hollow Nature Center in Cortland, NY, a job that he considered his true calling. At Lime Hollow, he found joy in driving all kinds of heavy equipment and tractors, repairing whatever needed fixing, and being part of the construction of a covered bridge. His co-workers became his dear friends and he loved watching children discover the wonders of nature. Tom was also a proud amateur radio license operator (WV2Z) and a member of the Amateur Radio Emergency Service. His hobbies included cycling (he completed two 100 mile bike rides around one of the Finger Lakes), photography, pottery, fencing, drawing, writing poetry, building a boat, woodworking, listening to opera, and being a gentleman farmer for a number of years raising goats, chickens, and pigs. Tom is survived by his daughters, Nancy (Dave) Martin of Marco Island, Fl (formerly of Niskayuna), Susan (Tom Hirt) Reese of Castleton, and his four grandchildren: Elizabeth and Andrew Bohl and Jill and Jeffrey Martin. Tom’s family would like to thank the staff at Kingsway Manor, and in particular, Patty B., Patty L., Rae, Tina, Elizabeth B., Susan R. and all of the nurses and aides, for their exceptional care of Tom. The family is also grateful to Hospice and Christine, who were so kind and supportive during his last weeks. A memorial service will be held at 5 p.m. on Sunday, November 8th for immediate family only but a Zoom Video link is available on the Lyons Funeral Home website for his friends and family to attend virtually. In lieu of flowers, the family kindly requests donations be made to the Lime Hollow Nature Center at limehollow.org/donate or 338 McLean Road, Cortland NY 13045. https://zoom.us/j/92386496956?pwd=bWxqM0RvbUY0SlRPbVFWYkZ2TCs5QT09 Meeting ID: 923 8649 6956 Passcode: 057417 Or Dial: +1 929 205 6099 Meeting ID: 923 8649 6956 Passcode: 057417 Participant Code: none