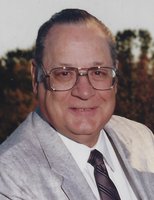 Rensselaer - Angelo Edward Serafino age 84, passed away suddenly on Wednesday March 25, 2020. Born in Albany, NY at Memorial Hospital on July 23, 1935. He was the son of the late Edward Serafino and Carmella DeFrancesco, stepson of Joseph DeFrancesco. Son in-law of the late Vito and Lucia Curione. Raised in Albany, he lived on Dongan Ave, Delaware Ave, Elm St, and Westerlo St, prior to moving to Rensselaer. His summer swimming pools were Lincoln Park and the Hudson River where he was proud of his solo swim across the river under the old Dunn Memorial Bridge from Albany to Rensselaer and back at 10 years old. He was a street kid spending many nights at St. John’s Hall and Trinity Institute. He loved the South End of Albany and S. Pearl Street with the many Italian and Jewish bakeries. He grew up with many friends and families in the South End, but the one that was like his second family was the Sidoti family. His friend Tommy, his brothers and sisters and especially Tommy’s mother, Mary, and father, Basti. Mary treated him like a son and he was always thankful to her. He attended grammar schools at St. John’s Albany, Cathedral Academy and Albany City Schools. He went to high school at St. John’s Albany and graduated from Philip Schuyler High School, class of 1954. At Schuyler he was an All Albany football player selected by both the Times Union and Knickerbocker Newspapers. Angelo attended classes at Russell Sage and College of St. Rose. Angelo served six years in the US Naval Reserve and two years in the US Army from 1959 to 1961 where he was stationed in Germany. He started his newspaper career selling the Times Union on State and Pearl Streets and also had a route on South Pearl Street delivering the Knickerbocker newspaper. He worked for the Hamilton News distributors of Out of Town newspapers, worked at Clarity Publishing Co which printed the Evangelist diocese newspaper, and part time at the old Knickerbocker newspaper prior to its merge with the Times Union. Angelo retired from the Albany Times Union in 1997 after 42 years. He rose from an apprentice to a pressman to the pressroom supervisor. At the paper he was proud of his relationship with his fellow workers and associates too many to name. All of the executives and top management, all of the journalists, editors, photographers, people in the advertising, classified, accounting, circulation, promotions, and personnel departments. All of the production people in the composing room, engraving, platemaking, mailroom, paper handlers, maintenance department, delivery people, and especially the men in the pressroom and working alongside his brother Eddie. He enjoyed many years playing golf with his uncle Phil and the once a week coffee time with him. He relished the many trips with Phil, his wife Dorothy and Mary Lou to Myrtle Beach. He and Mary Lou traveled across the county on a motor trip to California and back. Went on a river cruise in Europe and took many cruises to the Caribbean. Enjoyed many bus trips with their friends Domenick and Arlene Carnevale on BBC and Yankee Trails buses. He was and avid TV watcher, especially sports, travel and nature channels. He was a big fan of watching his grandchildren’s sports. Angelo was a member of the Graphic Communications International Union, Rensselaer Knights of Columbus, Cohoes Elks, and the West Albany Italian Benevolent Society. Angelo is survived by his beloved wife of 54 years Mary Lou Curione Serafino. His children Vincent (Renee) Serafino of Salem, NH, Denise (William) Trudeau of Latham, NY, and Teresa (Roberto) Volino of East Brunswick NJ. His grandchildren Brianna Serafino, Matthew and Christopher Trudeau, Roberto, Carmela, Rosario and Sofia and the late Angela Volino. His two brothers Edward Serafino and Joseph (Patricia DelDebbio) DeFrancesco. His brother in law Joseph (the late Patricia) Curione. He is predeceased by his brother Pat Serafino and sister in laws Marcia Serafino and Barbara Serafino. He leaves many cherished nieces and nephews, their spouses and children. He loved his aunts, uncles and all of his cousins. He so enjoyed hosting and attending gatherings with his family and friends. Due to the current health restrictions regarding Coronavirus funeral services were held privately. A celebration of Angelo’s life will be held at a later date to be announced. In lieu of flowers, donations can be made to the Albany Stratton VA Medical Center Albany, NY, follow this link https://www.pay.gov/public/form/start/46646309/ and choose Albany as location and in additional comments type “In Memory of Angelo Serafino”. Or you can mail donations in his name to Veterans Miracle Center 10 Interstate Ave Albany, NY 12205 Attn: Melody.